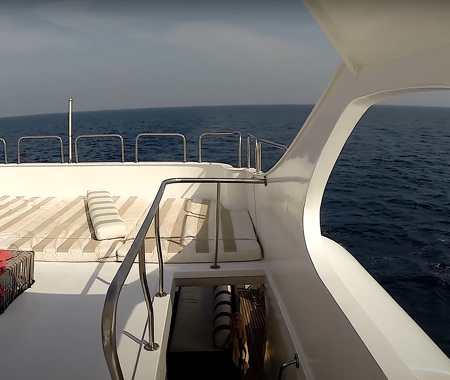 The Umbria is an Italian freighter located off the coast of Port Sudan. It's unquestionably one of the most beautiful diving wrecks in the world. The ship lies in calm waters under the shelter of the Wingate reef and is in perfect condition. It's cargo will interest you. The Umbria lies on port side at an angle of 60 degrees with in its hold a large amount of war gear, including 360.000 aircraft bombs. De Umbria sank during Word War II. While it was on its way to Eritrea it happened to anchor in Sudan when Italy declared war on the country. The Sudanese then occupied the ship, after which the captain deliberately sunk it.

The wreck of the Umbria is located near the port of Port Sudan near the Wingate reef. You can reach it in no more than thirty minutes. The wreck lies shallow, with some parts touching the surface of the water at low tide. This means that you can make a nice long dive of even more than 90 minutes. Enter the wreck if you have a wreck diving license. You will be amazed by this journey in history. There rows of bombs and ammunition in the hold are an amazing sight. Sort: Cargo-passenger ship. Launching: December 30, 1911. Propulsion: 6 cylinder steam engines. Speed: 14 knots. Length: 150 m. Capacity: 2000 passengers and 9000 tonnes of cargo. Cargo: War material including 36,000 aircraft bombs.

Only wreck divers can enter the wreck of the Umbria. The bombs on board of the SS Umbria don't have a detonator but remain potentially dangerous.