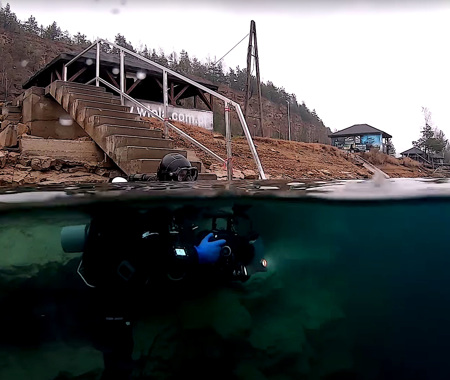 Dive site Koparki is located in an abandoned quarry near the Polish city of Jaworzno. The quarry was abandoned in 1997 after the Dolomite factory, Szczakowa, went bankrupt. The whole quarry and all the working materials, including two gigantic excavators, were left behind during this collapse. A dive in Koparki is versatile, exciting and special. Paid diving.

Koparki is a dive site with plenty of diving facilities near the water front. Sign up at the dive center and build up your set. Koparki has several jetties where you can enter the water. Descend along the vertical wall and follow the lines of the dive routes to dive past the pump stations, bunkers, workplaces and tools. One of the lines leads directly to an excavator. You'll also come across objects such as a shipwreck and the wreck of a BMW. Plant growth in the quarry is limited, however Koparki is home to several fish species. Roaches and enormous pike will accompany you during your dive.

Koparski can sometimes be busy during the season. Visibility can be drastically reduced under these circumstances. Paid diving.