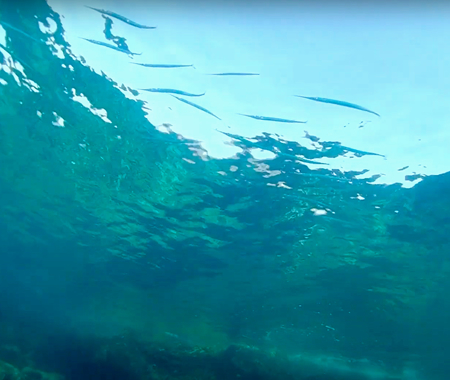 Cuevas de La Luz is one of the most remote and inaccessible dive sites Ibiza has to offer. It's a cave, with clear blue water and amazing light effects. Cuevas de La Luz consists of a large open cave with a system of passages underneath. The bright afternoon sun shines via the clear water in the cavern into the system, creating a spectacular display of light. At 9 meters lies another cave with two large pillars, called the Pillars of Hercules. Both caves can be combined in one dive.

Cuevas de La Luz is accessible by boat. The spot is located under the cliffs of the pristine Bay of Eubarca, between Sant Joan de Labritja and Sant Antoni de Portmany. The entrance to the cave is large and begins at a depth of 4 meters. Once inside, you first enter the cavern after which you can dive through the corridors. According to many divers an unforgettable experience.

Book a boat dive to reach Cuevas de La Luz. A shore dive is highly inadvisable. Be careful. People sometimes jump into the open cavern from outside.