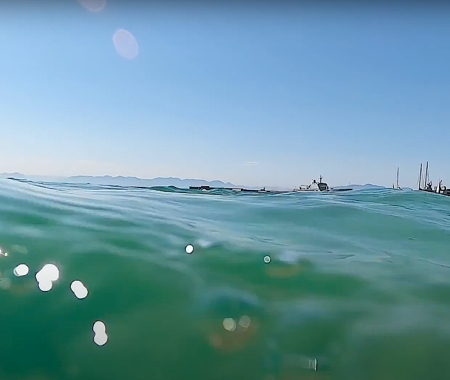 The Brunswick is the historic shipwreck of an English East Indiaman. The ship was armed with thirty guns and transported goods between Britain and the East Indies. The Brunswick ran aground near Simon's Town on September 19, 1805 after losing three anchors during a southeastern storm. The wooden wreck lies in shallow water and has partially sunk into the fine sandy bottom. The wooden ship's structure above the sand is overgrown with kelp and other seaweeds. The Brunswick lies at an angle of about 45 degrees to the coastline.

The Brunswick lies about 120 yards off shore in front of Simon's Town. Park along the public road and walk across the railroad to reach the entry point. Depending on the tide, you'll enter the water via rocks or a small beach. Now swim out for a while to reach the wreck of the Brunswick. The wreck can also be reached by boat.

The Brunswick is located in the Table Mountain National Park Marine Protected Area. A permit is required. The wreck is an archaeological site protected by law. Don't touch anything or take anything with you. Dive preferably in winter at low tide. Difficul