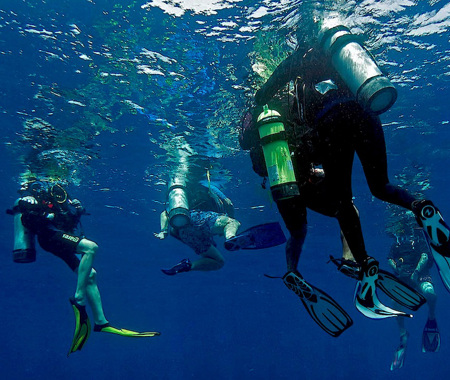 Boca Ascension is a large bay on the rugged north side of Curaçao. Boat dives are made here in front the bay entrance. The bottom of Boca Ascension consists of rocks to a depth of 15 meters, followed by a reef that ends on a sandy bottom at 30 meters. Gobies and crabs hide between the rocks, while hawksbill turtles and parrotfish thrive on the reef. The sandy plateau is the domain of thornback and eagle rays. Boca Ascension is a beautiful walking area, where flamingos and turtles can be seen from the high rocky coast. Boca Ascension used to be called the Plastic Bay because all the plastic, that was dumped into the sea in past times, collected in the bay. Nowadays it's a protected nature reserve. The site is named after country house Ascension.

Boca Ascension is only accessible from a boat. Enter the water and dive over the rocks, corals and sandy plateaus. Nothing will remind you of the huge mountain of plastic that once filled this bay. The coral of Boca Ascension is most beautiful between 13 and 25 meters deep.

Boca Ascension is a nature reserve. High waves and strong currents and under currents in front of the bay. A fairly deep dive, keep an eye on your air supply.