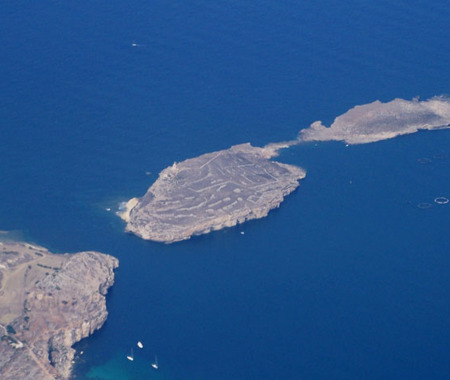 H.M.S. Kingston's remains, a few pieces of metal from a ship wreckage, lie in middle of the 100 m wide passage between the mainland and St. Paul's islands, known as the channel. The ship was damaged during a bombardment in WWII and was sunk here to prevent enemy ships from passing into the bay. This is a very shallow area between 3 to 12m deep, and it slopes deeper to around 25m as you head inwards to the bay. Crossing the channel to the south west wall of St. Paul's Island, one can find a few boulders and the remains of a hull belonging to the 'HANINI', a tourist boat that sunk here in 1994. Passing the channel to the left of the islands and towards the north, there is another WWII momento: In a depth of 6m, there are some engine parts and two metal plates which used to belong to a small unidentified fighter plane that was shot down here.

Visibility in the area is sometimes very low due to the fish farms in the area. In the near future these farms might be relocated bringing back visibility.

There is very heavy boat traffic passing inside the channel so extreme caution and an SMB are a must.