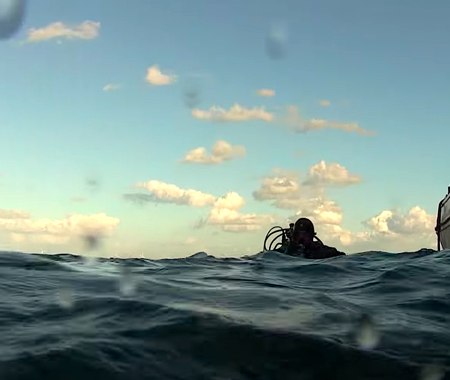 Slot Lodijke is an old castle dating from 1230, located at the bottom of the Eastern Scheldt Estuary. Slot Lodijke disappeared under the waves after the infamous Sint-Felixvloed (Sint Felix flood) of 5 November 1530, also known as the Allerheiligen vloed. The Antwerp diver, Edward Goyvaerts, rediscovered the remains in 2005. During the flood, a total of 18 villages and an entire town went down with the castle. The area is now known as het Verdronken land van Zuid-Beveland (the Drowned Land of Zuid-Beveland. There isn't much left of the old castle. The old walls have silted up and disappeared under the weeds.

Enter the water from the boat to pay a visit to Slot Lodijke. The ruins and old remains are difficult to recognize because they are completely overgrown with carnations and anemones. Yet, if you look closely, you can still make out the old brick markings and masonry. The loss of the castle is most likely due to an error in judgment by the lord of the castle, Adriaan van Reimerswaal. The flood began with a breach in the dike at Lodijke. Van Reimerswaal decided not to plug the hole. He hoped that the rising water would carve out a harbor near the castle. It ended in disaster.

TODI in the Belgian region of Beringen is a wonderful contribution to diving. TODI is an indoor dive site, similar to a tropical river. Diving in TODI …