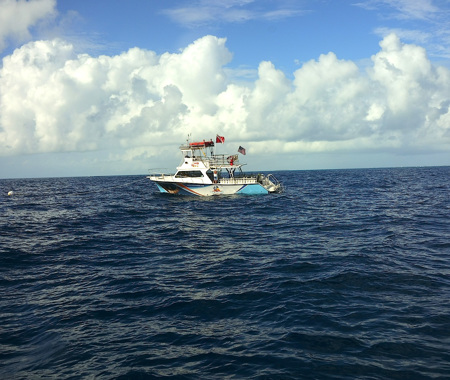 The USS Spiegel Grove. The ship is immense in size, it has the length of two football fields. The Spiegel Grove was sunk in 2002 near Dixie Shoals in Key Largo, Florida and lies between 18 and 40 meters, with the largest part between 25 and 28 meters. It is said to be the largest vessel that has deliberately been sunk. One dive on the Spiegel Grove is not enough to see it completely.

The sinking of the Spiegel Grove did not go according to plan. The date of sinking was scheduled for Friday 17 May around 14:00 hours, but it started sinking well before that time. Eventually she stayed on the side with her bow above water. A rescue team managed to sink the ship completely but didn't get her upright as planned. Subsequent efforts to achieve the desired result failed, until hurricane Dennis put the ship upright, to great surprise of the diving community.

Watch your air consumption, the ship is so big that you can easily forget the time.