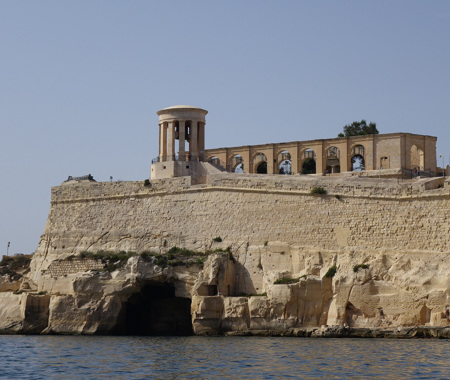 The Submarine Pen is an interesting dive spot and it lies north from the fish market at Valletta's Grand Harbour, just below the cliffs of Lower Barrakka Gardens. Left from the fish market's stairs after a 90 meter swim you will find a 40 meter long tunnel accessible from both sides in which it is possible to surface. Outside the tunnel is an area littered with boulders with inbetween lots of war debris and junk from after the war. The dropoff sends you to a depth of 25-30 meters. It is a sheltered spot where you can dive during all weather conditions and chances are high to find big octopusses. Bring a torch!

This dive site is mistakenly named after the Submarine Pens that were built into the cliffs on the other side, in Marsamxett Harbour, but they were never finished. Nowadays they are bricked up. Probably it was thought that the tunnel found here was a remnant of the former construction works, however it is a natural tunnel.

Be aware! Big ships tend to come in or leave the harbour, the pounding of propellors can be heard and felt and will make you think they are very close.